After the video surfaced, while the majority of users condemned the act of violence, the mentality behind it was also criticized. The only reason is that the sister demanded to participate in the ancestral home according to her religious and legal rights. On which the real brothers-in-law brutally beat the sister.

According to the details, the viral video clearly shows two men torturing a woman in a living room with hammers and helmets. When the mother tries to stop them, they are pushed down. 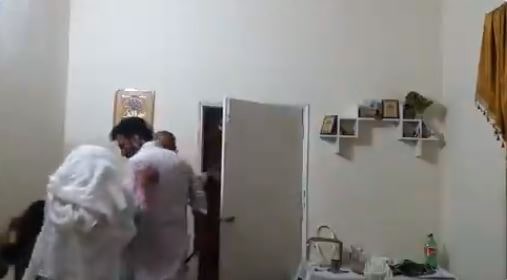 Talha, the son of the victim, uploaded the video on social media and appealed for help, saying, “Today, while my brother and I were not at home, my three uncles attacked my mother. What they beat my mother and grandmother badly. ”

Muhammad Arsalan, son of retired senior TV engineer Badar Bibi, who was tortured by his brothers, said: The brothers did not stop the violence and kept torturing them from time to time.

HELP ME!
I am uploading this video in position of very helplessness. Today my three maternal uncle attacked my mother when I and my brother were not home. They attacked and badly beat my mother and grandmother
Police is not taking action to help#HelpArsalanFamily pic.twitter.com/ly5UJynsIE

“Her mother is going through a lot of hardship. She is just asking for her right in the house she built with her father, not in the property that belongs to her grandfather,” he said. He said that the police also registered an FIR last night.

On the other hand, according to Dawn, Khyber Pakhtunkhwa police have confirmed that they have arrested three brothers on charges of torturing their mother and sister. The son of Aftab, Arshad, and Abdul Hanan has been arrested from the Amin Colony area of Peshawar, according to a message released on social networking site Twitter.

The brutality of those people did not end there, when they were beating my mother and grandmother, they also threw our belongings outside from our own house. Please help us get justice. #HelpArsalanFamily pic.twitter.com/PID5XnbtYO

Police have since registered a case against the accused under sections 354, 506, 337 (a), and 34 of the Pakistan Penal Court. The victim said that there was a dispute between her families over the property issue, so her brothers tortured her, which led to several choices, while she accused the brothers of harassing her. They are also threatened with death.

The police tweet further said that when the arrested accused were questioned on the matter, the accused confessed that they tortured their sister for asking for a share in the father’s property.

Women’s rights will be very important in Islam. However, when it comes to giving them their rights, sometimes men create a lot of obstacles for them. A similar incident took place in Hafizabad in which selfish brothers kept their sister for 20 years to avoid giving her share so that she could not claim her share in the property or inheritance.

Unfortunately, this is not the first time such an incident has taken place in our country. A similar incident was witnessed last year when a video was posted on social media by a girl named Zobia Mir. , In which he showed how his brother Arsalan Mir was torturing his mother. Meanwhile, Arsalan’s wife incites her husband to more violence against her mother and the son continues the violence. The video shook the whole nation.